Last week I received a phone call from a woman who’s Aunt had just passed away and she inherited a 2005 Toyota Rav 4.  Unfortunately, her Aunt had just passed away due to lung cancer.  The new owner is keeping the car, but the smell and disgust inside the car were unbearable. She asked if I would be willing to tackle the situation and we went over the options.  I first suggested a thorough detail and cleaning using my heated carpet extractor and vapor steamer.   This car was about to die as well.  I have removed smoke odors from probably a hundred cars in my day, but this one was by far the worst.  The photo above shows the headliner in the Toyota and you can see that it is stained yellow from the tar and nicotine buildup.  The smell was enough to make me want to run away.  When this car was inside of my shop, with the shop doors closed, it even made my shop stink inside.  It was time to hold my breath and get to work.

I used Meguiars All Purpose Cleaner to spray on the vehicle interior.  This is a great product that does a good job of breaking down nicotine and tar from the cigarette smoke damage inside the car.  As you can see the tar buildup is breaking loose and is actually dripping from the sun visor.  It wasn’t a great feeling knowing that the tar and nicotine were dripping on top of me, in my hair, all over myself as I was working.  What a glamorous situation this was! 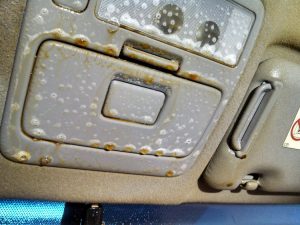 Here is another view of the tar and nicotine dripping from the overhead lights and sunglasses holder.  Usually, I do not use as much cleaner.  Just a light mist on a microfiber towel is enough.  But in this case, I wanted to make sure the entire surface was saturated enough to break down the nicotine and tar from the cigarette smoke damage.
I first used the Meguiars All Purpose Cleaner by spraying it everywhere on the interior of the car.  This did a good job of loosening the buildup.  I then used several, about 30, microfiber towels to scrub the interior.  Normally, on standard interior detail, I would use about 10 microfiber towels. 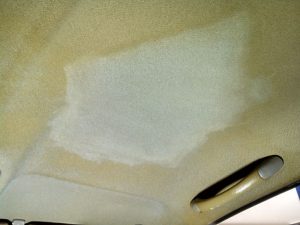 Cigarette smoke on the headliner.

Once I realized that this method was not doing as good of a job that I wanted, I decided to take it a notch further.  I recalled talking to the owner of the car before I started, and said that I was very hesitant in using steam and the heated carpet extractor on this particular headliner because the glue that holds it might break down and let the cloth headliner fall.  The owner said that she “didn’t care” and that I could do whatever it took to get the smoke smell out.  If the steam and extraction caused the headliner to fall, she was OK with that because the current state was unbearable.  So, I went ahead and used the vapor steamer with the brush head and agitated the headliner, then, while it was still hot from the steam, I used the heated carpet extractor and extracted a spot on the headliner.  It did a great job!  I was actually really excited to see some positive results.  As you can see from the photo above, there is a night and day difference. 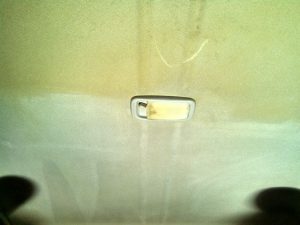 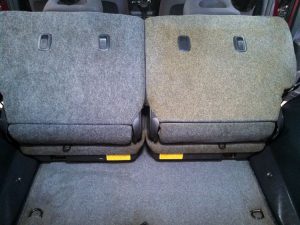 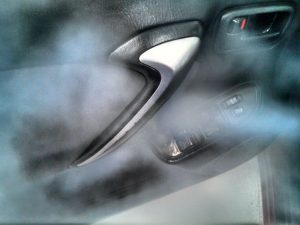 After spraying the door panels with Meguiars All-Purpose cleaner, I used the vapor steamer to blast steam all across the inside door panels.  This broke the tar and nicotine down at a literally gushing rate.  I then used a microfiber towel (about three times the amount as I usually use on a standard detail) to wipe away as much loose dirt, nicotine, and tar as I could. 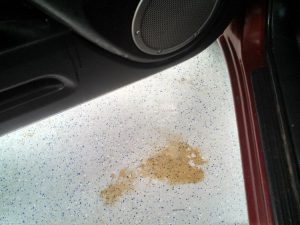 The photo above shows the nicotine and tar that had dripped from the inside door panel on to my shop floor.  This was done in just a couple of minutes.  The amount of tar that was removed from this vehicle was amazing.  Seeing these big changes actually did a great job keeping me from giving up! 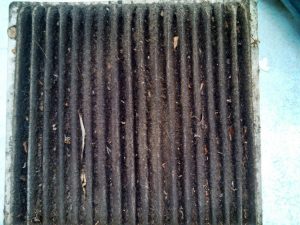 This is the cabin filter that was inside the vehicle.  I always remove the cabin filter in these cases because when I use ozone to remove the odor, I start the car, then turn on the air conditioner so it’ll re-circulate throughout the car.  I take the old cabin filter out because whatever passes through the ductwork also passes through the cabin filter.  Take a look at how dirty and nasty the filter is.  Just think, the former owner, who is now no longer with us, was breathing the air that passed through this filter!
The last step was to run ozone through the car to sanitize and remove the last of the lingering cigarette smoke smell.  I ran the ozone machine for approximately five hours, and when I was finished, I opened all of the doors on the car to air it out for a few minutes.  I then closed up the car again, and let it sit outside in the sun to get an accurate measurement of the “new” smell.  After about an hour, I opened one of the doors and poked my head inside to take a smell.  To my relief, I could no longer smell any trace of a cigarette smell!  When the owner arrived a few hours later, she was beyond overjoyed.  The car didn’t look perfect on the inside, as there were some traces of tar that I wasn’t able to totally remove from the headliner, but as one can see in the pictures, there is a night and day difference.  Take a look below at the final photo of the headliner after the cleaning process was completed.